The mission of GroMusic is to create a fellowship in which people of all backgrounds are able to gather together in an enriching environment and share their love of music through education, discussion, and community out-reach, encouraging both personal and interpersonal growth.

Dominic MelansonPresident/Co-Founder
At the age of 2, Dominic was already trying to climb up on the piano bench to pound on the keys, and at 4, he began taking regular piano lessons over a period of 13 years. He taught himself guitar and began writing music in high school which led him on a path to musical theatre, live music, multiple music groups, and teaching. With a background beginning in the service industry winding to a career in engineering, Dominic enjoys helping people by finding solutions to their problems and helping them to achieve their goals. Music is dear to his heart, and he is excited to see a shared vision grow which will aim to keep music education alive within the community and its musicians.

David FranklinSecretary/Co-Founder
David was fortunate to be raised with an eclectic taste for music. His dad took him to his first Grateful Dead concert before he learned to walk, his mom encouraged him to learn as many musical instruments as he could (and also put up with his non-stop singing in the car as a child), and his grandmother constantly exposed him to different types of music and performing arts. Music was a constant throughout his life, manifesting in some form or another through his work in adult residential care, elementary education, and engineering. Now, he is fortunate to be able to share his passion for music and education through the fellowship of GroMusic.

Ashley MelansonEditor/Project Management
Ashley’s love of music began at the age of 8 when she starting learning the clarinet and piano, and later the saxophone, as well as participating in musical theater in her community. In 2006, she combined this with her passion for writing through her work as a writer and editor for a local music magazine called Angst. During this time she also started working in internet marketing, which she has continued to do ever since. Ashley is very excited for the opportunity to bring her experience and passions together as the Editor and Moderator for GroMusic. 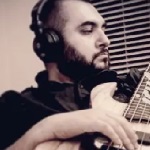 Juan CarlosOperations/Audio
Data analyst by day, musician and audio engineer by night, Juan Carlos “JC” has been contributing session mix-downs, employing a skillset acquired at SAE Institute.  With over 20 years experience as a multi-instrumentalist, JC’s influences range between 90’s grunge, Indie, and Progressive to Jazz Fusion, Classical, and World music.  Most notably, Juan Carlos is known to be a die-hard Tool fan, and bring Dave Brubeck’s jazz standards to the jam sessions.

Dom and Dave have been good friends since 1999, and have been involved in music nearly their whole lives. Having developed their friendship through musical theater in high school, they ventured off together to start a handful of rock bands. It was in this time that Dave and Dom realized that most people can’t dedicate themselves to playing music that often. While Dom and Dave still wanted to play, they didn’t want to continue forming bands with people who couldn’t come to practice.

While the two of them were jamming in Dom’s garage one evening, an idea occurred to them:

“Let’s put out an ad online and invite people to an improv jam once a week.  This way, we get to keep playing and sharing music with other people, and people don’t have to worry about the commitments surrounding a band!”

They posted the ad and hosted the first all-inclusive jam session at a local rehearsal studio in a small room on June 11, 2009. They packed two cars with everything they thought they might need to make it a great experience, and hosted their first Jam.

Since then, the jam sessions have grown. Some nights, it’s a calm 5 to 10 musicians, other nights they are hosting over 25 people.  In addition, Dom and Dave have had the pleasure of hosting live events at local pubs, city fundraising events, local food bands, and have held small acoustic jams at the beach.

Musicians who were once strangers to each other now had a place where they could meet other like-minded individuals and do what they loved to do most: discuss, create, and play music with others. A fellowship had formed, and more people were becoming dedicated to remaining a part of it.

Seeing how much playing with a group helped the regular jam attendees, and recognizing how sparse opportunities to learn the arts were, Thursday Throwdowns changed their name to GroMusic in 2014. Newly fueled with the idea to create a music education exposure program which would be free for the youth of the community to attend, a project which is actively in the works, the path towards a non-profit status began.

Once a month, GroMusic plans to host seminars and workshops as part of a 12-month music education series, which will expose participants to a variety of facets surrounding the world of music. Topics will include, but are not limited to, music theory, a focus on individual instruments, audio engineering and recording, and songwriting.  Students who participate in these seminars will also become eligible for the GroMusic scholarship program, which is aimed at enhancing and extending their education in music.  GroMusic will work with local music shops to help provide discounts on musical instruments and gear, as well as with music teachers to provide low-cost music instruction.

GroMusic will also extend their effort to provide networking opportunities for local musicians and those who participate in the music education series, continuing to provide creative outlets for musicians, a forum for discussion, and an opportunity to learn from others. Local music groups are encouraged to join our community online and share their events in our forums or on our event calendar for others to easily find. Teachers are encouraged to advertise their businesses on our forums, allowing students the ability to reach out and find the exact help they need.

GroMusic will continue their focus on being an open and safe space for musicians of any and all backgrounds and ages to come and play with a group of like minded individuals by regularly hosting their bi-monthly jam sessions. Musicians at any level are welcome and encouraged to come in and learn, listen, or play whatever music suits them. Jams are always free.